Geometric Algebra: Ascension of the Mind 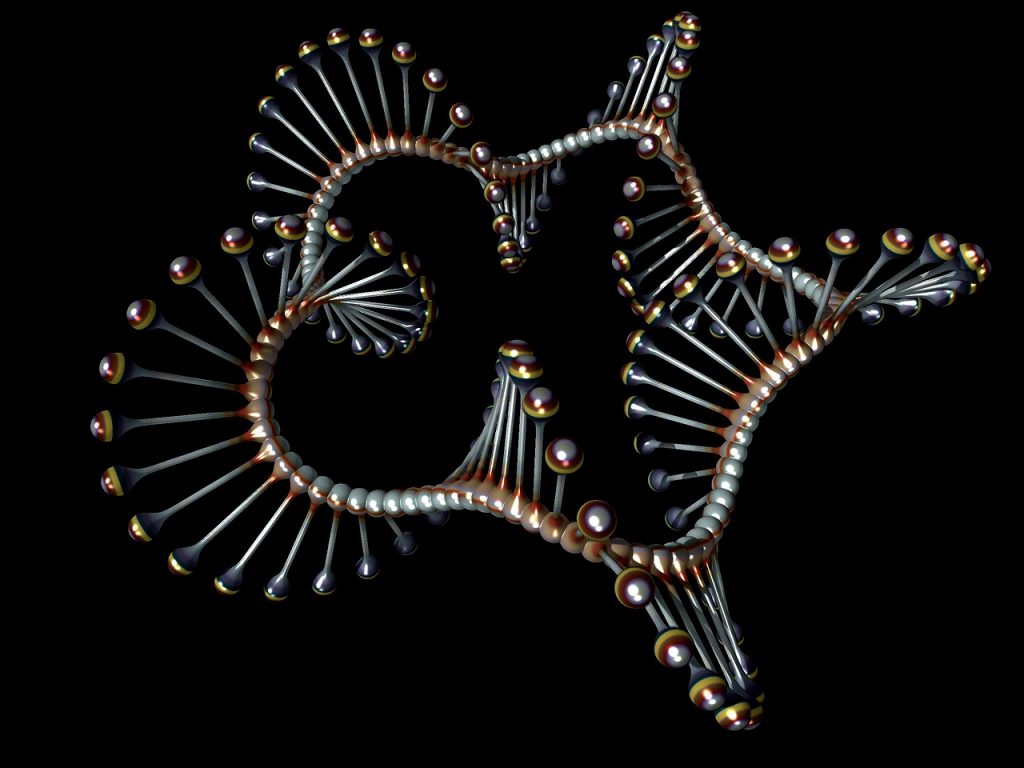 If you understand something in only one way, then you don’t really understand it at all. The secret of what anything means to us depends on how we’ve connected it to all other things we know. Well-connected representations let you turn ideas around in your mind, to envision things from many perspectives until you find one that works for you. And that’s what we mean by thinking!

I discovered Geometric Algebra (GA) back in 2003 and it caught my attention immediately. In my whole life as a student, engineer, researcher, and teacher I’ve never met a symbolic mathematical system so beautifully close to geometric abstractions. In this post, I try to explain how Geometric Algebra can express, unify, and generalize many geometric abstractions we use as engineers and computer scientists.

What I cannot create, I do not understand.

There are many ways we can understand Geometric Computing depending on our background and intended applications. One of the ways I find most attractive is the pattern of Geometric Generators. To explain geometric generators, I will give some simple examples in 3D Euclidean geometry.

If we have 3 real numbers a, b, and c, what geometric concepts can we represent using these 3 numbers? The following are two possible answers that we can get from most engineers and computer scientists: 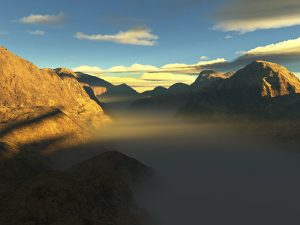 The two concepts are related but have very different geometric semantics and a separate set of legal geometric operations for each. For example, vectors can be linearly combined (scaled and added) to get other vectors, adding two locations has no meaning geometrically, we can add a vector and a point to obtain a new point, etc. There is also some implicit information required to complete these two representations. We assume we have a basic set of 3 orthogonal axes that intersect at an origin point, we call that construction the coordinates frame. If we change the selected frame while keeping the geometric locations and directions as they are in relation to each other, we must update the 3-tuples numerically representing each location and direction in our problem. The main point here is that in order to generate a geometric location\direction in 3D Euclidean space we need to use 3 intersecting axes, common for all locations\directions, and 3 real numbers per location\direction. Then we need some algebraic operations, like linear and affine combinations, that we can use to generate a representation of a direction\location from these basic elements.

Let’s go one step further. If we have two locations P and Q, what can we geometrically generate in our selected space? The first thing we can think of is an infinite straight line; a line segment and a ray are related but different geometric concepts that can be generated by these same two points. What about a point C and a real number r? Maybe a sphere with center C and radius r, or a weighted-point (a location having mass, charge, or density associated with it). What about an infinite flat plane N and a non-parallel line L? We can generate the whole space from these two objects by “sliding” N along L. We can also generate a single location (their point of intersection), a single real number (the angle between L and N), a single line (the projection of L on N), a pair of infinite cones by rotating N around L, and many other geometric objects. Just by varying the geometric operations we use on N and L we generate new constructions. What if we have an infinitely extending cylinder? We can extract its axis (a line), its radius (a real number), we can generate many points on its surface (for example to approximate it using a triangular mesh), and we can slice it using flat planes to get circles, ellipses, or pairs of parallel lines. 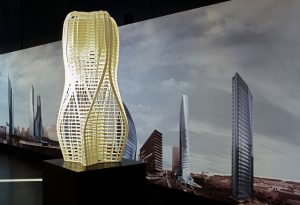 Now we begin to see a simple pattern and we can abstract its main components:

Anyone who worked with Generative Modeling 1 clearly recognizes and practices this pattern. This understanding is not so common, however, among engineers and computer scientists, especially in the early stages of their study and research. Most of us tend to lose sight of deep geometric abstractions hidden behind the many kinds of algebraic representations we are taught to use in our models. This creates serious problems on many levels for our geometric modeling abilities:

We need to find an algebra that can be used to clearly express our generative pattern of geometry in a unified manner, independent of coordinates, and with algebraic relations generalizable to any space dimension.

An Algebra for Geometric Computing

The two operations of our understanding, intuition and deduction, on which alone we have said we must rely in the acquisition of knowledge. 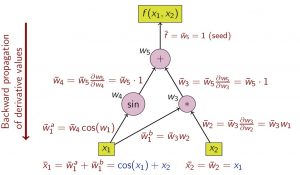 For more than 100 years now we have been using many algebraic systems to symbolically and computationally encode our geometric intuition. Algebra enables the deduction of new relations between symbolic representations having geometric significance. Our bag of classical algebras we use to represent many essentially-geometric concepts and operations include:

Using only one of these mathematical tools we can never model all aspects of geometric abstractions found in even a single problem of practical interest. We often need to use two or more of these algebras in our symbolic formulation of geometric ideas. Even worse, some geometric algorithms contain steps that are easier (or only possible) to represent using one algebra and\or set of generators, while other steps require a different algebra and\or set of generators 2. ًSo we need many algebraic representations for the same geometric concept, we need conversion steps between the representations. In effect, we need a huge number of algebraically ad-hoc techniques, whatever works, to solve our modeling problems. Sadly, we are completely lost in a jungle of symbolic abstractions, so what can we do?

Similar problems had been solved in some areas of engineering and computer science. Taking a quick look at problems modeled and solved with computers we find unifying algebraic systems at the core. For example: 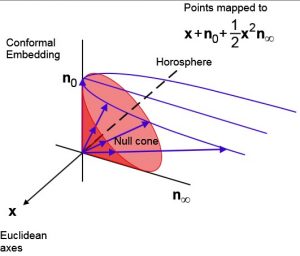 For geometric computing, however, we don’t have a single unified algebraic system for our problems; this was my incorrect understanding until 2003 when I first read two online tutorials on Geometric Algebra 3. I discovered that all the above algebraic systems are isomorphic to some GA or one of its subalgebras, so we can seamlessly integrate them together. I discovered that most GA relations are geometrically significant and independent of space dimension and coordinate frames.

Since then I discovered firsthand how Geometric Algebra shines as an algebraic system that forces us to think about geometry from the generative perspective I described above. I experienced a high level of clarity, unification, and generalization of geometric ideas I’ve never felt before. Many ideas became connected immediately after formulating them in the language of Geometric Algebra. This experience is a true ascension of the geometric mind!

Geometric algebra (GA) is a combinatoric system of spatial logic based on William Clifford’s hypercomplex algebras of the 19th century. Holistic, scalable, and filled with “common sense”, GA integrates various methods for modelling and engineering dynamic systems. […] The now classic work by the physicist David Hestenes, New Foundations for Classical Mechanics (1986) makes a strong argument for learning this approach by demonstrating the compactness of the math, while the most recent text by cyberneticist Eduardo Bayro-Corrochano, Geometric Computing: For Wavelet Transforms, Robot Vision, Learning, Control and Action (2010), demonstrates the expressivity of its powers for geometric reasoning. Many other references make a similar case: with its isomorphisms, geometric algebras encapsulate many other mathematical systems. With its outermorphisms, solutions worked out in smaller dimensions can often be extrapolated to higher dimensions. It is an expressive logic that allows intuitive mathematical experimentation across a widening range of disciplines.

Working with the algebra, physicists have developed a conformal split mapping of a 3 dimensional Euclidean space G(3) into a 5-dimensional one, G(4,1), based on Riemannian projection of 3D Euclidean space (R3) onto a hypersphere. Introduced into the geometric algebra community by Hongbo Li, Alan Rockwood, and David Hestenes in 2001, the conformal model greatly simplifies and generalizes calculations of general rigid body movements in Euclidean space. As a mathematical system for describing closed form solutions within Euclidean, spherical, and hyperbolic geometries, conformal geometric algebra opens the door to a rich set of Möbius transformations typically restricted to the 2D plane. The operators which reflect, rotate, translate, twist, dilate, and boost other elements and objects are called versors.

We may always depend on it that algebra, which cannot be translated into good English and sound common sense, is bad algebra. 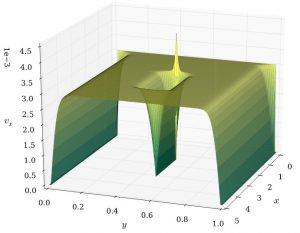 Many would argue that we can use matrices to represent all kinds of algebras used in practice including Clifford Algebras; an important subject in modern mathematics known as Representation Theory. This is true, theoretically speaking, but often impractical in many cases. The basic structure of a matrix and the simplicity of its addition and matrix multiplication operations is both a blessing and a curse.

Because matrices can represent many things, including raw lists\tables of numbers, we can use them as a universal low-level representation in our software implementations. Many numerical software systems used by engineers and computer scientists already do this: MATLAB, NumPy, ALGLIB, etc 5. In addition, many applications like computer graphics and robotics use homogenous-coordinate matrices as a universal representation for Euclidean, affine, and projective transformations. This is the good part, we can develop all our algorithms in the language of matrices based on Numerical Linear Algebra algorithms 6.

The prices we have to pay for using such simple universal algebraic structure are numerous, for example:

You don’t see something until you have the right metaphor to let you perceive it. 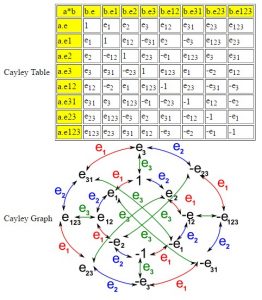 Many of these problems can be avoided using Geometric Algebra and its multivectors. GA has a much richer mathematical structure than matrix algebra as I will explain shortly. This sophisticated structure requires some time to learn but it’s logical and universal, so the learning time is well spent. Studying and using GA for several years I found many representational advantages of using multivectors over matrices, for example:

Naturally, we need both matrix and multivector representations. We just need to select the most appropriate one for the problem. We may, for example, select to express our problem using multivectors for teaching purposes, while coding computations for the same problem with matrices at a later stage. The good news here is that we can create optimizing compilers that automatically generate matrices from GA operations on multivectors. We need to explore both methods of representation and never walk with the “hammer of matrices” as our only symbolic tool for dealing with all problems.

Geometric Algebra: The Way Ahead

Instead of five hundred thousand average algebra teachers, we need one good algebra teacher. We need that teacher to create software, videotape themselves, answer questions, let your computer or the iPad teach algebra… The hallmark of any good technology is that it destroys jobs.

Geometric Algebra is being explored in many applications, for example:

Many opportunities exist for GA-based research and teaching, for example:

In the following post, I will talk about the main mathematical elements of Geometric Algebra and how they integrate to create its full power and beauty. This kind of information is a good starting point for anyone new to the subject and in need for a clear roadmap to follow.